Nanny's Garden
Every so often I get up the nerve to go by and look at my grandmother Nanny's old house on McGregor Drive. It takes nerve because even though the house itself from the front looks much the same, subsequent owners have taken liberties with the yard that do rather upset me, so it's a mixed bag of emotions when I drive by.

(Actually, since I wrote the above, I have been working for some time off and on at the next door neighbor, so I get to peer into Nanny's totally overgrown and neglected backyard a lot now.)

The thing that bothers me the most is the removal of almost all off the Loblolly pines in the front and several in the back. The McGregor Drive loblolly's are amongst the very largest in Richland County and I grew up adoring these behemoth trees. Nanny loved them too. She also knew that the pines were the lynch pin of the local garden "ecosytem." Cutting down canopy pines leaves dogwoods and azaleas with too much sun, and they become stressed and weakened as a result. It changes everything in a garden.

There is this irrational fear of pines near a house falling on the house. Much worse is when a pine NOT near a house falling on a house. Some people apparently fear pine limbs cracking in an ice storm and crashing through the roof and ceiling. It has happened before. But I just don't know how people can buy a place like Nanny's and ignore its natural and human history like that, and dismiss those great old trees with a wave of the hand and a check to the tree service. It bugs me.

Had the same owners bought a favorite hilly rocky place I call Nandina Hills I could see them having all the inconvenient rocks hauled off, the place graded, and a barren pathetic little lawn planted on some measly flat place. 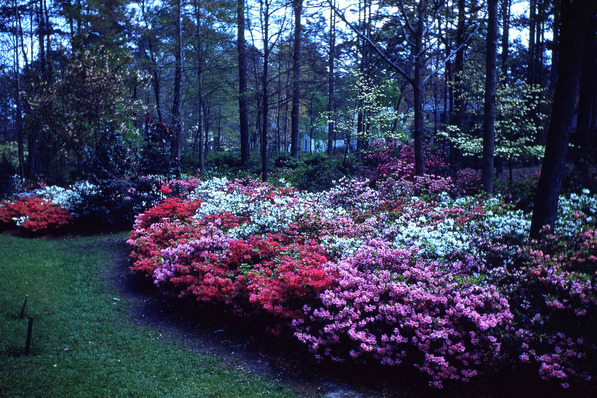 Bottom Terrace Nanny's Garden
When it comes to gardening I appreciate it a lot when people work within the givens of their property. Large loblolly pine trees are such a given. They determine how light and shade filters to the ground and thus the kinds of plants and trees that will grow well below. Slopes offer opportunity for gentle terraces and not unnatural grading. Creek bottoms create opportunity for entirely different plant and animal systems. I have always thought that it was better to work within the boundaries of what is given, the form before us, and try to make beauty come forth from that. Land is like genre in music, like meter in verse, like the configuration of the baseball diamond. It's what happens within the boundaries that makes great the art. Respect the given. Respect the land.

Most of us don't buy houses built on newly cleared land. And thus most of us, when we buy houses, also inherit the choices and loves of others who have gone before.

There is an old bent red bud tree on our property in Greensboro. I happen to know the prior owner who planted that red bud, what it meant to him over the years, and how  through various transfigurations brought about by ice, lightening and bad pruning, the tree continues on, gnarly as it may be. It would have taken two minutes to take it down and make the lawn a lot easier to mow, but I chose to respect the choice of my predecessor.

Often when I am pruning an old shrub I can see how the plant has been pruned over time. That pruning has impacted the subsequent growth of the shrub and also impacts the current pruning. As I see that other hands have shaped this plant I am reminded that in most facets of life there are those that have come before, shaping and informing our current choices. We are no more blank slates than the houses we buy. We were born into certain situations and were shaped by many who came before, and we should respect their love and their effort. We may think we can cut out all traces of their influence upon us, which we cannot do, but even if we could we generally don't do such a better job than they did. Likewise when it comes to gardening I feel inclined to respect the work of my predecessor and thus his or her person and memory. Respect what has come before.

When we let "nature" take its course around here that usually means (in a garden) that English ivy, kudzu, grape, smilax, and honeysuckle will soon cover everything, beginning a very long and slow progression toward a mature forest appropriate to the region. Gardening does not respect the laws of natural succession. It is more concerned by nurture than nature, ideally striking a balance between the two (or maybe arriving at a truce).

The shapes and colors and smells that make gardens so pleasing are cultural artifacts. They represent nuture. Gardening is an interference with the principle of entropy. It isn't "natural." It is an imposition. Much thought and energy and action must be applied to keep any space from "reverting" back to nature. But those who impose order and design have a responsibility over the whole. In my mind this responsibility includes respect - as considered above. This respect calls us to balance nurture with nature, that is, we respect the natural land forms and native ecosytems as much as we can. Slope and sun and climate all constitute aspects of that form inside of which the gardener creates. But since these factors also determine which species of plant that are most suitable, these "natural" or native species also constitute aspects of that form with which the gardener works.

I am not a zealot when it comes to native vs. non native species. Some of my favorite plants are non-native. But I have wandered the woods and worked in gardens enough to see the damage non-native-plants-gone-wild can do. And I care about ecosystems enough that it is not just plants that matter in a garden, but also insects and birds and other animal species. Urban and suburban spaces can have more of an impact than one may realize on the health of the native ecosystem, and can contribute to its health or to its slow demise.

But there is no such thing as a true "native" or "natural" ecosystem. If we could turn back the clock to find "original" would we go all the way back before the invasion of the continent by Asian peoples 10 or 15 thousand years ago? It is appropriate to be concerned about aggressive invasive plants and animals and to eradicate them when possible. But we have to be reasonable. Even the common lowly earthworm is a species alien to our fair land.

Likewise, the southern azalea and camellia garden is not particularly native. The imported camellia has no more native right to a space than the Japanese honeysuckle covering it up. But camellias are not invasive. And as a long-time pillar of the Southern garden they call for my respect. My grandmother grafted and pruned and deeply loved her camellias and I think of her often when I am trying to nurture an old overgrown (and grown-over) Camellia back to shape. Someone very much like her loved this plant for many years, and I respect that.

Nanny also loved her English ivy. It too is a non native. One difference between the two is that whereas a camellia left to itself will get gangly and sick and die, English ivy left to itself will take over everything. The same could be said - but worse - for wisteria or honeysuckle. As these plants take over and out-compete native species which have a more direct relationship with local fauna, they hurt the ecosystem as a whole.

Nanny had Mr. Dove to keep her Ivy constantly trimmed. Most of us don't have a Mr. Dove and the ivy (and wisteria and so forth) slowly conquers our spaces. Better I think to get rid of the stuff altogether.